This is now the ‘live’ home of my blogs but the archive can be found here www.simonnottracing.wordpress.com

I also write an exclusive ‘Tales’ for Racing Ahead Magazine each month, please support the magazine that supports me.

On the face of it the card at Exeter didn’t look all that great, six races which included a favourite forecast at prohibitive odds-on, a bumper and a match to conclude. It seemed some bookies were put off turning up but the crowd appeared to be a very healthy size, maybe the good weather brought them to the top of Haldon Hill.

I was in someone’s bad books before racing. Richard ‘Tall Boy’ Watson shouted across the ring and called me a ‘troublemaker’. I know, I was horrified too, that’s a bit of an insult to make to a champion of the betting ring but that’s what he called me. He then came up and handed me a bit of card with the legend ‘Lilly Livered’ written on it with a marker pen and asked if I’d like it back. Well I had to tell him in all honesty that I had no idea where it had come from and that it certainly wasn’t mine. He said it had just come from his joint, someone had stuck it there. It seems that the mention I made in my previous blogs about a bookmaker less than keen to take a £500 bet had got around and that my thinly disguised description of him meant it was now common knowledge his liver was lilly. In fairness to me he seemed quite happy that I name him in the last blog. At least my character was redeemed to a certain extent in that he eventually believed it wasn’t me.

With that he started to circumnavigate the betting ring casting an accusing eye over his bookmaking brethren. It was only after pretty much all and sundry had been the focus of his his glare that Steve Copplestone owned up to the crime. Not much news in that you may think, well Steve is Tall Boy’s right-hand-man. Just goes to show you never know from whence the knife might come. Anyway I’m sure all readers will be pleased to know that is the end of the ‘Lilly Livered’ trilogy. If you want the kudos and bravado of being bluffed a lumpy one, you know where to go!

It wasn’t me Gov.

Lumpy ones were in evidence in the opening  Racing UK Profits Returned To Racing Amateur Riders’ Novices’ Hurdle. Paul Nicholls’ The Eaglehaslanded was lumped on by an odds-on backer. Exeter bookies absorbed the onslaught of cash, including a couple of bets of £3000 and another brace of grands. Despite those bets the jolly’s price drifted from 4/9 to 4/7 when money came in for David Pipe’s For ‘N’ Against’ supported from 9/4 into 2/1 but to lesser amounts. It did seem as if the odds-on punter was going to leave it behind when the favourite was headed three out. The books wouldn’t have had time to start counting their winnings because The Eaglehaslanded rallied and as commentator, the ever excellent  Richard Hoiles so descriptively put it, started ‘Nostrilling’ ahead on the run in, the nostril having become a neck at the line.

The Ilfracombe Food Service Handicap Hurdle was a more competitive affair betting-wise with both Drifter and Prince Of Poets backed to 11/4, the later saw a bet of £3000-£1000 struck. There was also money for Only Gorgeous 11/1 into 8/1. Those backers can consider themselves unlucky because Kevin Bishop’s Cruise In Style got up in the shadow of the post under a terrific ride from James Best to thwart their bets. At 16/1 the winner was a right result for the bookies who allowed themselves a cheer. 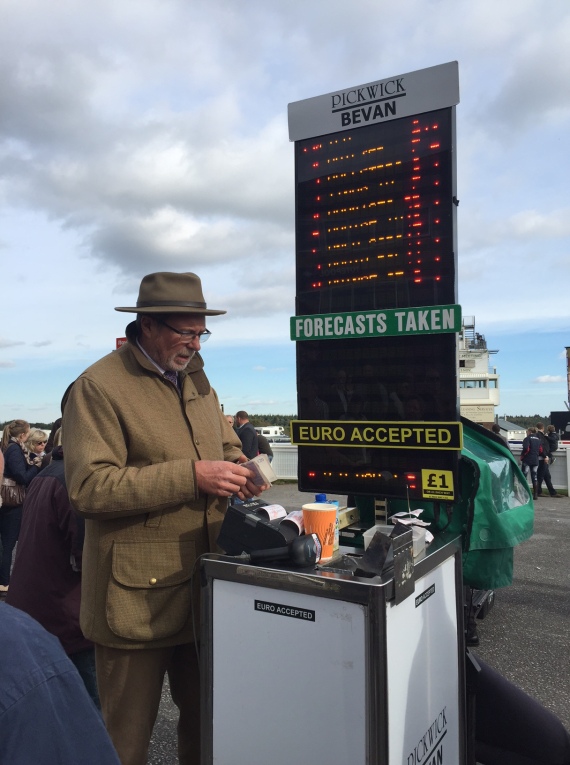 Only four went to post for the Racing UK Anywhere Novices’ Hurdle with Paul Nicholls’ Abidjan the 2/13 favourite having been backed from 1/6. A couple of punters had £600 on to win £100 and trousered their money without work with the minimum of worry easing down at the finish.

The seven-runner race before the penultimate Betfred Mobile Handicap Chase was another lively betting heat, with Caulfields Venture backed from 13/2 into 5/1 and Dursey Sound from 7/2 into 11/4. Someone also had a monkey on David Pipe’s Border Breaker at 10/3. Dursey Sound’s backers had the shock of their lives when their fancy nearly came down at the first, Richard Johnson did well to stay on board but the gelding never really recovered eventually finishing fifth. The monkey punter left it with the bookie, I assume not Tall Boy, as his fancy never really got into the race. It was Caulfields Venture’s backers that proved to be the shrewd cookies when Emma Lavelle’s charge won a shade cosily from 8/1 shot Danandy.

When I see a camera I give it ‘Zoolander!’

Every now and again something happens in racing that nobody present has seen before, and so it was in the Racing UK Day Pass Just 10 ‘Junior’ Standard Open NH Flat Race. Castle Cavalier got rid of 7lb claimer Ciaran Gethings in the paddock and in doing so injured him so there was no way he could ride (let’s hope he’s not too badly hurt). With the rest of the field down at the start it was announced that Gavin Sheehan would take over as a late jockey change. The gelding had to be re-saddled then Sheehan weighed out before joining the others and taking part in the race. Now I say nobody present had seen it before but I’m more than happy to be told if it has occurred elsewhere in recent years.

In the meantime there had been a whisper that Harry Fry thought a lot of his 4/1 shot Water Willow but all the money was for William Knight’s Russian Approval backed from a (very) early 9/2 into 2/1. That money stayed with the bookies when jockey Richard Johnson seemed unable to get the horse into the race. That was mainly because Dennis O’Regan took the initiative with 5/1 shot Golden Gate Bridge making all and winning by a couple of lengths for trainer Mark Pitman. Water Willow had come with a dangerous looking challenge only for it to be repelled inside the final furlong. Armaloft Alex was on the runner up though not present, his text message rued the luck that Mark Pitman should chose today to have his first winner since Monsignor in the early naughties and deprive him, indeed, that’s the way the mop flops but those that kept faith in the Pitman yard were rewarded at 5/1.

Sponsors Betfred must have been a bit gutted that only two went to post for their Best Mate Beginners Steeple Chase and the £5000+ prize money. Some of the bookies didn’t appear too keen either and a few firms, I assume having copped their whack already, upped sticks and left before the match took place. As soon as the betting opened on course, at around 5/6 Chase The Wind and evens Dragon’s Den a punter waded in to a front row layer and asked for an even £6000. At the off the jolly had hardened to 8/13 with Dragon’s Den at 5/4. The punter was right and the market wrong, Dragon’s Den won as it liked though hopefully the bookie kept his nerve and hedged advantageously.

Well I would say that, I champion the bookies, all of them, even lilly-livered ones – come racing and do betting battle with them, eyeball to eyeball much more fun that tapping on a computer.

My  book ‘Skint Mob – Tales From The Betting Ring’ is a book about the bookies, punters and other wonderful characters I have met in my time on racecourses. There have been some nice reviews.

It’s also available on Amazon, Nook, Kobo and on Kindle.