This is now the ‘live’ home of my blogs but the archive can be found here www.simonnottracing.wordpress.com

I also write an exclusive ‘Tales’ for Racing Ahead Magazine each month, please support the magazine that supports me.

Several of my Westcountry bookie mates were missing from Newbury with Newton Abbott racing today too. The ring wasn’t exactly thin though with the rails spilling down past the gap. The crowd wasn’t thin either, it looked like a great turnout for a Friday and the eight-race card.

The opening Al Basti Equiworld EBF Stallions Maiden Stakes saw some lively betting, one firm on the rails laid a £5000-£100 each-way Sweet Dream Lady which stayed with him as she could only beat one home. At the business end of the market there were decent bets for Fighting Temeraire including a £2500-£1000 and Operative, backed from 2/1 into 13/8 but they too stayed with the bookmakers. It wasn’t all good news though, a couple of firms ran into 5/1 winner Christchurch at 11/2 including a bet of £2000-£360, for new readers or racecourse novices, that bet was with the ‘fractions’. If you don’t know about them but want to bag the on-course value you should read this Always ask for fractions.

The second race, the Dubai Duty Free Finest Surprise Handicap was the sort of heat where you have to feel sorry for the bookies. The forecast favourite Satellite was weak in the market drifting from 11/8 to 2/1 before settling at 15/8, Keep In Line was the one they wanted against him backed from 9/2 into 7/2 including four monkeys and a £1600-£400. There was a neck between them at the post with the latter getting the money but the rest were a huge 17 lengths away, in short the bookies had no chance, but at least they got the jolly beaten. Of course they had to get it in the book to cop first. 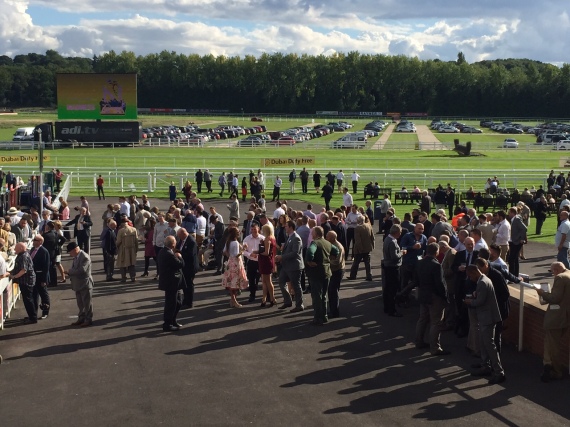 A Friday at the races better than a day in the office, shop, factory, country estate….

The Dubai Duty Free Handicap only attracted four runners to compete for its £25,000 prize money. The only one the punters wanted to be on was  Memorial Day. Some backers got on at 6/5 and even money but there were still takers at the starting price of 8/11. At the line it was 5/2 winner Fractal that was too good for the short-one. You might think that the books would have been over the moon. Well of course the ones that just wanted to get the jolly in the book and hope to get it beaten were, especially the ones that got it in at the wrong price. Others were less than pleased. One firm on the rails was disgusted by his fellow bookies generosity; ‘Look at the best prices the heroes bet to’ he spat; ‘we bet well over-broke’. Another tool in your on-course armoury is knowing when the bookies are betting badly, which is goodly for punters. It’s not often a bookmaker let’s us in on their trade secrets but Ben Keith of Star Sports has done just that in a recent blog. Check it out here, but not until you have finished reading this of course. Ben’s Blog – Percentages

The bookies got another odds-on shot beaten in the Haynes, Hanson & Clark Conditions Stakes. There had been a few quid about for Special Season ensuring it went off at 8/13 but it proved no match for Stormy Antarctic the 9/2 second-in. One firm on the rails who likes to advertise ‘money without work’ had obviously taken a chance the jolly because he was roaring home somebody named ‘George’, ‘Aye Aye George’ ‘Good Lad George’ and all the rest of it, arm aloft in triumph. I’m assuming they are related given the familiarity to Mr Baker who rode it to victory. One of Bo Brown’s punters wasn’t as chuffed with the ride Pat Cosgrave gave the favourite, he even took the time to come back to Bo’s joint and tell him so, ‘He rode like a wally’ was his politer than you might expect comment. No so polite was his comment that followed about what he’d like to do to him, but we won’t go there and Bo still had his money.

Weirdly there were no shouts with triumphant arm aloft from the bookies  of ‘Aye Aye Frankie’ and ‘Good Lad Frankie’ when Frankie Dettori won the Dubai Duty Free Cup on 5/2 favourite Hathal. There were plenty from the punters though, not so weirdly.

Betting had only just got underway for the five-runner Dubai Duty Free Full Of Surprises EBF Stallions Fillies’ Conditions Stakes when a lady approached a front row Tattersalls layer and asked for a fiver on each of the runners. The bookmaker smiled and agreed to lay the requested wagers. He waited until the lady was out of earshot before he confided to me that it was the second time she had done it. The rumours that they later offered to send a car around to pick her up and bring her to the races tomorrow proved unfounded. I imagine the look on her face when she came to draw her fiver and some shrapnel after 8/11 favourite Nathra won the race deterred them from anything so mercenary.

‘Which one is Frankie on?’ was the question on several lips when betting commenced for the penultimate Al Basti Equiworld Handicap (Div 1). He was on Bnedel backed from 11/4 into 9/4 despite having an unpronounceable name, they probably just asked for number 7. Despite the money for Frankie’s mount there was a right old stick on Credit Swap from 20/1 into 8/1. The latter beat the former but sadly for their backers they finished seventh and eighth respectively.  Kastini the 11/4 second-in won the race with some ease so no good for the books, at least that vindicated the decision of a couple prominent rails firms to take early baths before the race. 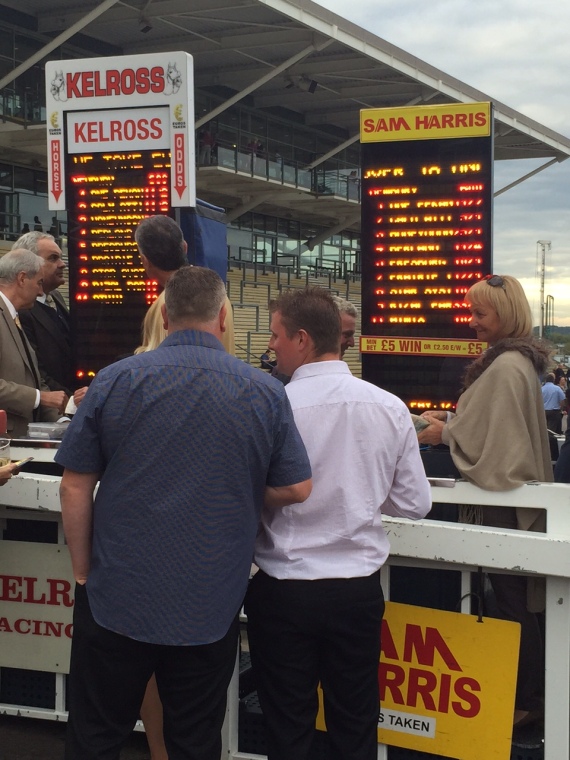 You can still be on, the lucky lucky last.

The lucky last was the 6pm. ‘Too late for this crowd’ lamented Rocky on the rails. It did seem that business had dwindled somewhat but there were still bets about including a £3000-£1000 Berland which went off as 2/1 market-leader. There was another too. ‘I’ve laid three-and-a-half monkeys Star System’ volunteered one rails layer, who went on ‘The guy never backs a loser’ he gazed into his computer screen and uttered the fate-tempting words, ‘it’s OK though this one is already 20/1 on the machine in running’.

A minute or so later the guy still hadn’t backed a loser, in fact he’d backed the easiest winner of the afternoon. ‘I can’t believe it’ bemoaned the bookmaker. One has to assume he hadn’t availed himself of the 20/1 in running. As he was packing up all glum-faced the presentation came on over the loud-speakers. Huge congratulations to the winning owner who had flown all the way in from Kentucky USA especially to see his horse run.

Wouldn’t it be nice if they gave that sort of information out before the race.

My  book ‘Skint Mob – Tales From The Betting Ring’ is a book about the bookies, punters and other wonderful characters I have met in my time on racecourses. There have been some nice reviews.

It’s also available on Amazon, Nook, Kobo and on Kindle.